It’s the ultimate underdog story. The owners of Staffordshire bull terrier Roxy left her at an RSPCA centre in 2017. However, the staff at West Hatch Animal Shelter in Somerset soon recognised the potential in the abandoned pup. Having worked closely with the police for over 10 years to unite them with rescue dogs that have the potential to join the force, they got in touch and arranged for Roxy to undergo specialist training. RSPCA supervisor Sue Dicks told the Evening Standard:

“Roxy was the right age, was good around people and other dogs, and was really confident.”

Roxy’s training began with Avon & Somerset Police where she took part in a 10-week bootcamp. During her time there she took an intensive training course on detecting explosives. Roxy also learned how to be a sniffer dog. This involves not only being able to locate and identify smells, but also how to communicate her findings with her handler. Roxy spent two years with Avon & Somerset Police in total. 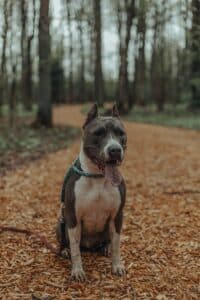 Roxy then moved on to the Hampshire & Thames Valley Police to work in the specialist search unit. She was teamed up with her handler PC Camilla Carter and completed her training in February 2020. PC Carter said:

“Roxy is a superstar. She is intelligent, very systematic and thorough. I love working by her side, she’s my crew mate and we have each other’s backs.”

Since finishing her training at Hampshire & Thames Valley Police, Roxy has had many opportunities to put her skills to the test. Her role includes sniffing out explosives on private jets, at venues before high-profile events and locations surrounding VIP visits. She even worked on a few big jobs for the Royal Family. For example, the funeral of Prince Phillip and the wedding of Princess Beatrice, both of which took place at Windsor Castle recently.

Although it’s common for Labradors, spaniels and German shepherds to do this kind of work, it’s thought that Roxy is the only Staffie currently working as a sniffer dog with the police. PC Carter said:

“To see her working and know she’s a rescue dog whose life could have been so much different makes me so proud; it’s amazing to see her doing her job and loving it.”