Cat Behaviours: What Do They Mean?

Ever noticed your cat rubbing against your hand or nudging their face against yours when on your lap? Cats have scent glands all over their body and they use them to leave scent marks on things, including you. While actually called head “bunting”, this behaviour shows that they feel comfortable with you and see you as part of their colony. They want to put their scent on you so that you smell familiar to them; if they could talk, they would probably be saying something like “You smell like me. You’re mine. I feel safe and relaxed with you.”

There could also be the explanation of your cat just wanting some attention. If they nudge their head up against you and then tuck it down or to the side, they may be wanting you to give them some fuss – perhaps a neck tickle? They most likely remember that in the past, they have displayed this kind of behaviour and gotten something pleasurable from it in response, so they learn that this is a good way of attention-seeking.

Slow blinking by a cat (you know, when they look extra sleepy and close their eyes for a few seconds) is a way of telling you that they are very comfortable and content in your presence. Don’t directly stare at your cat, as that will often make them nervous. Instead, try developing a further mutual trust by slowly blinking back at them! You may also notice your cat blinking a lot when others cats are around; this is to let them know that they are not a threat and there’s no need for any hostility.

This goes all the way back to kittenhood. A kitten will instinctively knead their mother when nursing in order to stimulate the milk flow. As an adult, they will often carry on kneading when presented with a soft surface (e.g. your lap) because they associate kneading with the comforting motion of nursing. It shows that they have a lot of affection for you – you’re seen as a surrogate mother! 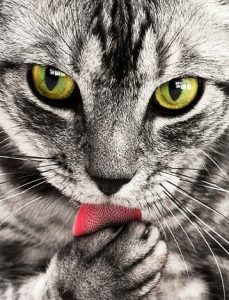 Cats are natural-born hunters and have retained their hunting instincts from their wild ancestors. In the wild, mothers teach their kittens how to survive, which includes how to catch prey. They will bring back dead animals for them to eat and also live ones for them to kill. Translated into the modern day; you are your cat’s surrogate family, so when they bring back a “gift”, they are either giving it to you as a sweet gesture, or because they think you’re seriouslylacking in hunting skills and need some help.

There are a few theories as to why cats sit in boxes. Firstly, boxes offer a safe and secure place for a cat to sleep as they are enclosed and serve to hide your cat well – which would help them survive in the wild. There’s also the theory that a box is a stress-relieving tool; in new house, a box will often calm/get them accustomed to their surroundings sooner. They could also be trying to conserve body heat and a small place, such as a shoebox, is an ideal insulator.

Drawing back their lips when smelling something

Sometimes, you may notice your cat sniffing something, making a bit of a funny face and opening its mouth. This is known as the Flehmen Response – Flehmen meaning “curl the upper lip” in German. When your cat is smelling something that is unusual or of interest to them, they will open their mouth to allow the scent to reach the roof of it, where a second scent organ is located. This organ is called the Jacobson organ and it amplifies your cat’s sense of smell. It’s mainly used to analyse pheromones and other scents.