Black cats have always had a bit of a hard time. First it was their association with witchcraft back in the Middle Ages, now it’s because they’re not photogenic enough to satisfy the “selfie” generation. The RSPCA has reported that of the more than 1,000 cats currently in care in the UK, 70% are black or black and white. The Moggery, a rescue centre in Bristol, says that all of the 40 cats currently in its care are black and owner Christine Bayka says that the situation is worse that it has ever been during the 21 years that the centre has been open.

Bayka told The Times: “It’s worse now because black cats don’t show up in selfies”. She added: “It happens all the time, I will go through the questions and say ‘are you flexible about colour?’ Then they will say ‘yes, as long as it’s not black.’”

The Moggery urged Bristol-based black cat owners to have them neutered back in February to try and prevent any unwanted future black cats from being abandoned and stuck in rescue homes.

The animal charity Blue Cross said that between 2007 and 2013 there had been a 65% rise in the number of black cats it took in annually. 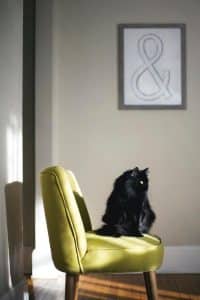 A north-east London branch of the RSPCA said that black cats receive less inquiries on social media than other cats. A representative told The Telegraph:

“We had some photos of a single eight-week old tabby kitten on our Facebook page and received around 30 calls in two days from people keen to adopt him. We had maybe one call in relation to the black kittens which were posted for rehoming on the same day.”

The owner of a Nottingham-based cat rescue centre told The Telegraph that ginger male cats are the most popular. Dr Jane Tyson, a scientific officer for the companion animals department at the RSPCA said: “Ginger and tabbies have the distinctive markings making them look more attractive to some but we would urge people to look beyond what an animal looks like. Their fur makes no difference to how much love they have to give.”

However, it’s not all doom and gloom for our dark-furred friends. Rachel Saunders, London Cattery Manager at Battersea Cats and Dogs Home said that while black cats do tend to take around three or four days longer to rehome, they do all go to loving new homes and some people even specifically ask for a black cat.