Humans and cats have resided side by side for over 100,000 years. They are the most popular pet on the planet and are independent creatures who are generally quite low maintenance. Cats are well known for their quirky and sometimes surprising habits and personalities. Discover some of the most famous cats throughout history.

Sometimes also spelt ‘Creme Puff’, this cat from Austin, Texas is thought to be the oldest cat that ever lived. Cream Puff lived for an astonishing 38 years and 3 days, passing away in August 2005. Jerry Perry, her owner, also had another cat that lived for 34 years and 2 months. So, what was his secret to their long life? Unfortunately not a secret that veterinarians would recommend! Cream Puff’s diet was said to include some things you’d expect, such as turkey, bacon and dried cat food. But Perry was also giving her coffee with cream and dropping red wine into her eyes every two days, which he claimed helped with circulation.

Although her original name is unknown, Unsinkable Sam certainly lived up to the rumour of cats having nine lives. The German battleship that Sam called home sunk in the Atlantic Ocean in May 1941. She was discovered floating in the sea clinging to a plank of wood by the British crew of the HMS Cossack. She lived aboard happily for 5 months until that ship also sank when struck by a German torpedo. The lucky feline also survived this and went on to live on the aircraft carrier HMS Ark Royal. But you guessed it, this ship was also torpedoed and sank 30 miles from Gibraltar. After that, Unsinkable Sam gave up his sea legs and retired in Belfast at the “Home for Sailors”. 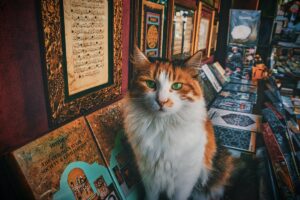 Ernest Hemingway was given Snowball in the 1930s by a sea captain called Stanley Dexter. Snowball was a polydactyl cat, meaning she had more toes than she was supposed to, six in this case. The descendants of Snowball are still living at Hemingway’s home in Key West, Florida, which is now a museum.

Lincoln’s love for cats was well documented and it’s said he would spend hours talking to them each day. His wife, First Lady Mary Todd Lincoln would often tell reporters that ‘cats’ were his main hobby. His two cats, Tabby and Dixie, were given to him by William Seward, who was Secretary of State. The cats were completely spoiled and were even reportedly spotted being fed from a golden spoon at a formal dinner once.