What to do if you meet someone with a dog phobia

I know it’s hard to imagine that anyone could not like dogs. They’re adorable right? But living with a fear of dogs is a daily struggle that many have to battle with. Known as cynophobia, it can be a debilitating phobia for those that suffer. Sufferers will generally avoid all places where dogs are likely to be, including parks and beaches. And the rise in the number of dogs during the pandemic has only made this more difficult. As a dog owner, it’s important that you know how to react if you meet someone with a dog phobia.

The first thing you should do is educate yourself on the laws surrounding dog ownership, particularly those about being in public. As it stands, there are no current laws requiring your dog to be on a lead in public spaces. However, you should always check the local rules of the place you’re visiting. For example, dogs might need to be on a lead at some parks and beaches. They might also be completely prohibited. Some places only allow dogs during certain times of the year or at specific times of day. Local authorities can issue fixed penalty notices or fines for anyone breaking the rules. 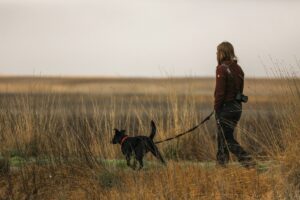 Secondly, be vigilant when walking your dog. When you’re in a busy area, it’s best to keep your dog on the lead if possible. If your dog approaches someone who is smiling and fussing over them, then it’s likely that you don’t need to worry. However, if someone responds negatively to your dog, show some empathy and understanding that not everyone likes dogs or is used to them. If the person has a genuine fear of dogs, shouting over to say they shouldn’t worry because your dog is very friendly isn’t going to help. You should try and get your dog away from that person and back on the lead as soon as possible.

With this in mind, it’s a good idea to ensure that your dog has some basic training under his belt. For example, mastering effective recall will be a big help. Knowing they’ll come straight back when you call will help you be more relaxed when walking your dog. It’s worth knowing that the lawful definition of a ‘dog attack’ includes aggressive or threatening behaviour. Even if your dog doesn’t actually attack anyone, your dog’s behaviour only needs to cause someone to be fearful of an attack to be punishable by a fine or even jail time. So it’s in your best interest to make sure your dog can behave well in public as well as everyone else’s.