Living with dogs can protect your kids from illness

We’ve all heard about ‘good bacteria’, especially the kind that gets mentioned a lot in yoghurt adverts, but it turns out that dogs can add to the amount of ‘good bacteria’ that children are exposed to, and therefore help to strengthen their immune systems and protect them from things like asthma and allergies.

A recent study, published in the New England Journal of Medicine, focused on children who grew up on farms. Within the first three months of life it was found that children were less likely to have asthma if they lived in close proximity of animals, such as those in the Amish community, compared to those who grew up on industrialised farms away from animals.

“It all comes down to a more diverse biome – a naturally occurring community of flora and fauna,” says Dr Jack Gilbert, Director of the Microbiome Centre at the University of Chicago.

Another study concluded that “dog ownership raised the levels of 56 different classes of bacterial species in the indoor environment, while naturally more fastidious cats boosted only 24 categories” 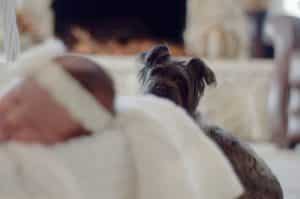 The next step in the study is to investigate whether these children can maintain a stronger immune system as they continue to grow.

As well as this new research, a previous study conducted in Finland between 2002 and 2005 by Dr. Eija Bergroth from Kuopio University Hospital found that during the first year of life, babies who grew up in homes with pets were 44% less likely to develop ear infections and 29% less likely to receive antibiotics, compared to children who didn’t have a household pet.

Aside from the positive effects that dog ownership can have on children, an article published on the American Heart Association website suggests that owning a dog can help adults reduce their risk of heart disease thanks to the increased level of physical activity that comes with walking a dog.