Naming your pet is a unique experience. You’ve got to think of something that will suit not only the way that they look, but also their personality. Not to mention that it’s also going to signify your interests and quirks to others when you’re shouting their name across the park. Your pet is part of your family. But unlike naming a child, where tradition and the opinion of others might influence your choices, naming your pet is a much more informal affair. You can definitely be a bit more free and playful with what you choose.

The most common dog names are still human names and would work equally as well for children as well as pets. However, a trend has been slowly growing which has seen the rise of food-based names. While the most popular foodie pet name could still work for humans (Honey), there has been an increase in more quirky cuisine themed names too. Although Crumpet, Crumble and Custard made the top 100 food-related names according to a survey by Rosewood Pet, it appears we are also looking globally for inspiration too. Names like Nacho, Mochi, Gnocchi & Boba signal a love for far-flung foods. And it appears that we’re not biased when it comes to sweet or savoury either. For every Fudge, Biscuit and Cookie, there’s a Pumpkin, Pickles and Pepper to go alongside it. 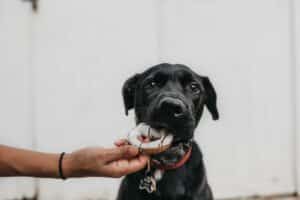 Giving our pets names like these is certainly a more modern trend. In the Middle Ages, it was much more common for people to give their pets names based on physical traits or characteristics of their personalities. For example, Whitefoot or Meone (little meow). Anne Boleyn was said to own a dog who was named ‘pourqoui’ (why in French) for its inquisitive nature. Another of Henry VIII’s wives, Catherine Parr (the one who lived), named her dog after her arch-enemy, the anti-Protestant Bishop of Winchester, Gardiner, as a way to poke fun at him.

So, next time you’re out walking your dog, have a listen and see how many foodie pet names you can hear being shouted across the park. At the very least, it might remind you of that thing you forgot to put on your shopping list!