Should we be co-sleeping with our dogs?

A 2019 survey by itchpet.com revealed that two thirds of pet owners let their furry friends share their beds. A 2020 survey by Silentnight revealed that 52% of respondents would rather sleep next to their pet than their partner. But why do so many of us love curling up next to our pets when it’s time to sleep? Should we be co-sleeping with our dogs?

Although some people may be wary of sleeping with their dogs due to bacteria, disrupted sleep or  getting covered in pet hair, the more scientists look into co-sleeping with our pets, the more benefits it reveals. Historically, people kept dogs out of the bedroom so as not to upset relations between a husband and wife. Another reason was to prevent the spread of disease. But new studies have shown that the benefits of co-sleeping with our pets may far outweigh any potential risks. Head of the department for disease control at the London School of Hygiene and Tropical Medicine, Professor James Logan told The Guardian:

“There’s no doubt that dogs can carry bacteria and parasites that could do us some harm, but generally I think the risk is very low. You could argue that being exposed to some of these organisms might actually do you some good – people who have grown up with pets and other animals tend to have fewer allergies, for example.”

But science says they could help us to sleep better…

American academic medical centre, The Mayo Clinic, recently studied forty people co-sleeping with dogs older than 6 months. The study found that every single participant slept better with their dog in their room. The size or breed of the dog appeared to have no bearing on the quality of sleep. Lois Krahn, Mayo Clinic sleep medicine specialist told cnet.com:

“We found that many people actually find comfort and a sense of security from sleeping with their pets.” 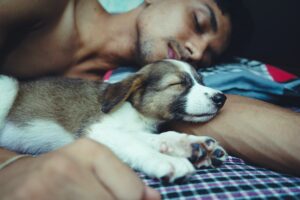 Researchers at Azabu University in Japan published a paper that revealed how interacting with dogs can increase our levels of oxytocin (the love chemical). This in turn promotes theta brainwaves which occur during REM sleep. Scientists say that theta brain waves promote creativity and help us to ‘organise’ our memories and emotions. This release of oxytocin will also lower your heart rate, reduce stress and elevate your mood.

“While pets can seem like a great bedtime companion, they are bound to disrupt our sleep patterns in the long-term, despite how soothing it may seem to have them in the bedroom with us.”

It’s best to decide whether you should co-sleep on a case by case basis. You know your dog best and what you’re willing to tolerate during the night. What works for one person won’t necessarily work for another. It seems like the science is saying that if it feels right for you then it won’t cause any harm. Snuggle away!