One of the main dog myths that they are colour blind is false. Although dogs can’t see nearly as many colours as humans, they don’t see in just black and white. Dogs only have two kinds of color-detecting cones in their retinas whereas most human retinas contain three kinds of cones. This means that the canine colour spectrum consists of mostly yellows, blues and violets – they’re unable to distinguish reds, greens and oranges, so they appear somewhere on the yellow to blue colour field to them.

Your dog’s nose is not always wet, so when it’s dry sometimes there’s no need to worry, it’s completely normal! It may be dry, for example, just after he’s woken up from a nap; this is because he’s not licking his nose when he sleeps which stops the constant flow of moisture to it. It can also become temporarily dry from lying too close to a radiator or a heater in the colder months, because of the warm air blowing into their face. Their nose will usually go back to its moist, original state pretty soon after waking up/moving away from a strong heat source. However, if they ever have any difficulty breathing, crustiness around the nose or discharge, you should call your vet.

3. A dog’s mouth is cleaner than a human’s

Nope. Although most of the germs in a dog’s mouth are dog specific and unlikely to cause any harm to humans, they still pick up lots of other yucky germs. Think about what your dog licks and eats off the ground during a walk, the dirt that their favourite toy is rolling in when you throw it across the field, or what they lick off themselves. Also, a lot of dogs don’t get their teeth brushed as frequently as humans, so dental tartar and bacteria can build up in their mouths too. 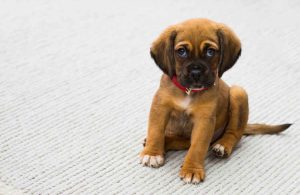 4. A wagging tail is a sure sign that your dog is happy

Obviously, we all know that a wagging tail can indicate your dog is feeling happy, but it can also be a sign of anxiety, fear or imminent aggression. If they’re wagging their tail because they’re feeling like this, the tail may wag slower, erratically, or be high-set/straight up. Generally, it’s best to look at the body language as whole before approaching a dog you don’t know.

Although older dogs may suffer from poorer health, bad hearing or limited vision that makes learning or following commands harder, age is NOT a determining factor for learning new tricks. Dogs are ready to learn new things at any age and teaching them is a fantastic way to keep their mind sharp as they get older.