Cats are mysterious creatures and there are many cat facts that you probably don’t know about your beloved feline friend. They have many hidden secrets and fascinating cat facts hiding behind their soft and cuddly demeanour.

For example, did you know that the pad of a cat’s nose is unique, much like human fingerprints are. The stripy, swirly ridges that make up that adorable pink little pad on the end of their noses come in endless variations makes your cat completely unlike any other on Earth.

It’s also not commonly known that cats can be lactose intolerant. Many of us are familiar with the scenes of cats from cartoons or adverts on the telly happily licking away at a saucer of milk. But in actual fact, as cats grow older, they produce less lactase, which is the enzyme that helps them to digest milk. So while you may think you’re giving your kitty a treat, you might actually be giving them an upset stomach and maybe even diarrhoea. 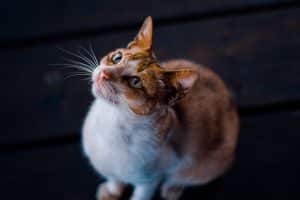 Another interesting cat fact is that nearly all calico cats are female. Calico is the name given to cats which are white, black and orange in colour. Over 99% of cats with this style of colouring are girls, and in the very rare instance that you find a male calico, it will almost definitely be sterile. It’s all to do with chromosomes and genes. You can read the science behind it on this blog.

Did you know that cats have a secret hidden eyelid? As well as having an upper and lower eyelid, they also have a third eyelid that moves across the eye diagonally. Animals tend to get more dust in their eyes due to their proximity to the ground so this magical third eyelid sweeps across the eye whenever your cat blinks, cleaning and lubricating their eyeballs. It’s also known as the nictitating membrane.

Although you may commonly hear your cat purring or meowing, did you know that they are capable of making over 100 different vocal sounds? They can growl, chirp, snarl and trill and each sound has a different meaning.

So there you have it, not only are cats cute and cuddly companions, they are also quite complex creatures with lots of hidden secrets!