It’s a well-known fact that dogs are man’s best friend, and they can sense amazing things. Not only are they loyal, dependable and very good at snuggles, but they are also highly intelligent and can sense many things that humans aren’t able to.

First off, many of us take for granted our dogs’ amazing ability to remember commands and learn tricks. It’s estimated that a trained dog will remember around 165 different words and commands. That’s pretty impressive! To put this in perspective, a trained cat may only retain approximately 25 to 35 words. It is said that poodles, border collies and German shepherds are among some of the most intelligent breeds. It’s also thought that dogs may have a basic understanding of time. Studies have shown that the longer a dog is apart from its owner, the more excited it will be when they return. 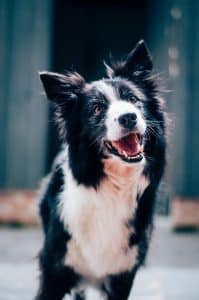 Dogs are very sensitive creatures and are able to sense a range of human emotions. They are even able to sense pregnancy in women and will often become more affectionate as a result. Dogs are also able to tell when we’re afraid. This is thanks to the pheromones we release as the adrenaline pumps our blood faster and faster around our bodies. Dogs have also been trained to help people with epilepsy, as they are able to sense when a seizure is about to start, some dogs will even lay on the floor to help to break their owners fall. Not to mention that dogs have been used for many years to help guide and support people with sight loss or impairments.

But dogs aren’t just in tune with humans; they seem to have a sixth sense when it comes to their environment too. It has been said that some dogs are able to sense an earthquake before it happens. This is due to their brilliant sense of hearing and as such, dogs with floppy ears may not be as good at this as a dog with pricked ears. Dogs can usually sense a change in the weather before we can too, particularly if a storm is approaching, as the air will smell differently and they may be able to hear thunder in the distance way before we can. Dogs are also being used to help save the bees! Using their remarkable sense of smell, dogs are being sent to sniff out American Foulbrood, a highly infectious bacterial disease that is killing off honeybee larvae.

So there you go, an army of pets saving the planet and saving the people. Aren’t dogs amazing?