None of us like to feel unwell, but our four-legged friends can sometimes suffer in silence with no real way of letting us know what’s wrong. They can’t tell us where they’ve been, what they’ve done or what they’ve eaten which are all key pieces of information when it comes to finding out what’s wrong with your dog, especially as the most common symptoms, vomiting and diarrhoea, can occur for a number of reasons.

The most frequent cause of stomach upsets in dogs is that they’ve eaten something they shouldn’t have. It’s not their fault; dogs are born scavengers. They are genetically hard-wired to eat first, think later. This can cause inflammation in the stomach or intestines (or both), which leads to vomiting and diarrhoea (or both!). Stomach upsets tend to be more common in the summer as the warmer weather leads to organic matter to decay more rapidly. 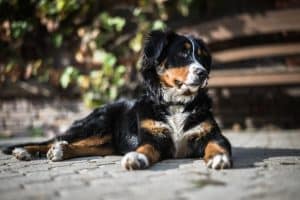 An upset stomach may also be caused by a viral infection. Again, this is more likely to occur during the warmer months as dogs get taken out for walks more and have more opportunities to socialise with other animals and spread any infections. Other possible causes of an upset stomach include a change in diet, stress, allergic reaction, parasites and bacteria.

In most cases, dogs won’t need to see a vet, as gastric upsets tend to sort themselves out. However, you will need to see a vet if there is blood in the vomit or diarrhoea, if your dog’s stomach starts to swell, if the illness lasts more than 24 hours, if your dog seems to be in pain or becomes depressed or if your dog has frequent spells of vomiting, diarrhoea or retching over the space of a few hours.