Do all pets need to be microchipped?

If you’re a dog owner, you are probably aware that it became compulsory in England, by law, to have your dog microchipped back in 2016. However, you may not realise that you can microchip almost any domesticated pet if you feel they are at risk of theft or going missing. Microchips are cheap, harmless and very effective, greatly increasing the likelihood of a lost pet being returned to its owner.

Currently, in the UK, cats are not legally required to be microchipped, although there is talk of potentially making it compulsory in Wales. Cats are prone to roaming a little too far and you want to make it as easy as possible for them to be returned home in the event that they get themselves lost, or for the owner to be notified if a car should hit them and they are taken to the vets. Recent statistics from the RSPCA showed that 87% of cats brought to their shelters in 2017 did not have a microchip and therefore couldn’t be identified and reunited with their owners.

With rabbits usually being kept outside without a collar, they are also sensible candidates for microchipping, especially if your garden isn’t as secure as it could be. A microchip is inserted into the loose skin on a rabbit’s neck and is no more painful than a standard injection. Your rabbit will not be able to feel the microchip once it is in place and it will last a lifetime. 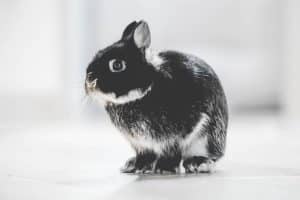 It became compulsory by law in June 2018 to have your horse microchipped. This was introduced by the government to try and prevent abuse and to improve welfare. RSPCA figures had shown that over 1,000 horses had to be rescued after being dumped in 2017. All horses, donkeys and ponies will need to be microchipped by October 2020.

And it’s not just our furry mammal friends that can be microchipped, reptilian pets such as tortoises and snakes can also be protected with a chip.

If you can’t bear the thought of your beloved pet going missing then visit your vet and book in a microchipping appointment. It could save you a lot of heartbreak in the future.