Dog Behaviour: What Does it Mean?

Dog behaviour can tell you a lot about your dog and some behaviours can have multiple meanings. Read below to find out what to look out for.

There are quite a few reasons why your dog behaviour might include licking you. Some of these are:

Unlike humans, who have sweat glands all over their bodies, dogs only have them on the pads of their paws. Therefore, panting is the main way for them to cool down when they are hot. Panting allows dogs to circulate the necessary air throughout their body. Dogs also pant when they are excited or scared – you may notice them panting when you get home from work or during a thunderstorm. If you notice that your dog behaviour starts to include excessive panting, take them to your vet.

Dogs tilt their heads and reposition their ears when we’re talking to them in order to hear better, identify familiar sounds or words and understand what we’re saying. They may also tilt their head to get a better view of our facial expressions, body language and eye movements. 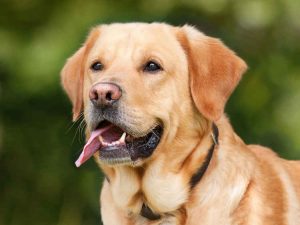 Your dog could be yawning because they’re tired (this could be obvious if they’re yawning while stretching out in bed), but it’s more likely a sign of stress or a calming signal. When using a yawn as a calming signal, your pup is trying to tell you that they’re getting frustrated with something, for example while in a training class, and they are yawning to calm themselves down. This would indicate that you should change your approach to training somehow.

On the other hand, it may signal stress or eagerness. For example, your dog may yawn repeatedly when a new person comes into the house as a way of dealing with their nervousness. They could also be very excited about going out for a walk and in anticipation for this, they may yawn to control their excitement.

Often another calming signal. Dogs who are licking their lips (often a subtle flick of the tongue) could be feeling uncomfortable or stressed about a situation they’re in. They will lick their lips in order to soothe an animal or a person whom they perceive as a threat to stop any aggression. For example, if your dog has an accident in the house and you raise your voice at them, you can almost count of them licking their lips. It’s basically their way of saying “don’t hurt me, I’m not a threat to you.” It’s best to give them some space for a while if you notice your pup doing this, as it will allow them to relax and feel more comfortable again.