A golden retriever and a black Labrador have proved that they really are man’s best friend after saving their owner’s life. The incident happened on a walk up Braithwaite How, a 564 foot mountain located just outside Keswick in the Lake District. During the walk, the 71-year-old man, who has not been named, lost consciousness and collapsed. Subsequently, medical staff think he may have suffered a seizure.

The two dogs immediately sprang into action, appearing to work as a team. The Labrador rushed off to find help. It alerted a nearby walker by barking and gesturing for her to follow. When the woman made it back to the man, she found the Golden Retriever laid by his side ‘keeping guard’. She immediately called 999 for help. 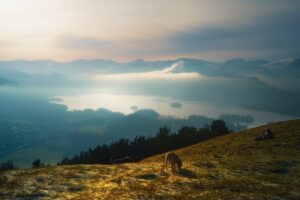 A group of 12 volunteers from the Keswick Mountain Rescue Team arrived, assisted by a unit from the North West Ambulance Service. The man had regained consciousness by this point. After the medic had assessed him, he was able to walk down the mountain to the awaiting ambulance. Then the man went to hospital for further checks. The entire rescue operation took around one hour.

The dog’s intelligence and commitment to their owner impressed the rescue teams. A spokesperson for the Keswick Mountain Rescue Team told The Independent that they had never seen anything like this before. They went on to say:

“Obviously search and rescue dogs with years of training with their handlers do a good job in locating missing or injured persons, and alerting their handlers. But it’s unusual and surprising for untrained dogs to do this.”

Rob Grange, of the Keswick Mountain Rescue Team appeared on an interview with BBC Radio Cumbria and told them:

“It’s not an unusual thing for a dog to do, but it’s just the fact a completely untrained dog decided to do this that is absolutely wonderful. I’ve not come across it in 10 years of mountain rescue.”