Drop in neutering means a rise in cat numbers

During the pandemic, many people turned to pets to provide comfort, entertainment and solace. Which is understandable, as it has been scientifically proven that a pet can make you happier. As well as an explosion in the number of people getting puppies, cats also saw a significant rise in ownership numbers too. A study by the Pet Food Manufacturers Association (PFMA) revealed that 3.2 million UK households have welcomed a pet into their home since the pandemic. Of the UK’s 34 million pets, 12 million are cats.

There’s been a drop in neutering

But the RSPCA has warned that there could be as many as 1 million cats who have not been neutered. Veterinarians perform the surgical procedure of neutering to prevent a cat from reproducing. The term refers to both male and female cats. But ’spaying’ refers to female felines and ‘castration’ refers to male cats. As well as preventing unexpected and unwanted litters of kittens, there are several other health benefits for your cat too.

The benefits of neutering

In female cats, neutering has been found to reduce the risk of uterine infections. It can also reduce the risk of your cat developing breast cancer. In male cats, neutering can help keep them safe by reducing their motivation to roam. This drive to explore can lead to cats try and escape from dangerously high windows or very small spaces. Reducing your cat’s drive to roam may also help prevent road traffic accidents, which can be fatal. 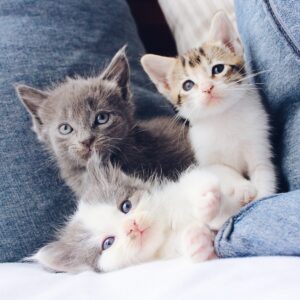 What the charities say

The RSPCA says the demand for pets has caused long waiting lists for neutering appointments that veterinarians just can’t keep up with. Every year, around 91% of the UK’s pet cat population undergoes neutering. However, this dropped in 2020 to just 86%. Samantha Watson, the RSPCA’s cat welfare expert, told the Independent:

“Although the decrease in neutering is fairly small, this equates to a lot of unneutered cats meaning that we could have a cat breeding explosion on our hands should these figures decline again.”

Unwanted litters of kittens put pressure on charities like the RSPCA. The charity took in over 4,000 abandoned cats across the UK last year. A spokesperson from the animal welfare charity Cats Protection said that owners should keep unneutered cats indoors.