Everything you need to know about Alabama Rot

First discovered in the 1980’s in American Greyhounds, Alabama Rot has made its way to Britain and is affecting an increasing number of dogs each year. Also known as CRBV, Albama Rot is a deadly disease that causes blood clots and damages internal tissue that can lead to skin ulcerations and severe kidney failure. Unfortunately, it is not yet known what causes the condition but owners are being advised to avoid walking their dogs in muddy areas.

The first known case in the UK was recorded in 2012 and since then, numbers of affected dogs have risen each year with 19 cases being reported in 2016 and 40 in 2017. As of March, there were already 29 confirmed cases for this year. The most serious outbreak in the UK was in the popular Hampshire National Park, the New Forest but cases have been reported in several other counties too.

Due to the lack of clinical research carried out, the cause of the disease is yet to be determined and means that there is no specific advice on how to prevent your dog from contracting the disease. The Forestry Commission has not warned owners to avoid any specific sites and wants to reassure owners that only a small number of dogs have been affected. However, it has been suggested that the disease could experience seasonal fluctuations as most cases are reported between November and June. It is also suspected that the disease spreads from wooded and muddy areas and that dog owners should keep a close eye on where their dogs go and to be vigilant when washing mud off. Vets4Pets have a map on their website which allows you to check your local area for reported cases of Alabama Rot. 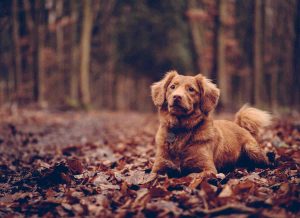 It’s important to know what the signs of Alabama Rot are so that you can determine whether your dog has been infected. An early diagnosis gives your dog the best chance of survival. The first sign are skin sores that commonly appear below the knee or elbow and sometimes on the stomach or face. These can present themselves as patches of swelling, lesions or even open ulcer-like wounds. They will usually be accompanied by hair loss and will cause the dog to lick the affected area. Between two and seven days later, the dog may suffer fatigue, vomiting and reduced appetite, which are the outward symptoms of kidney failure.

Now you know what to look for, it’s important to remember that the percentage of dogs affected in the UK so far is miniscule and that early detection and quality veterinary care can go a long way in aiding your dogs recovery.