Everyone knows that dogs are man’s best friend. But dogs are so much more than that. Often putting themselves in harm’s way in order to protect their owners. Here we’ll look at some of the most famous dogs throughout history and read about their incredible feats of bravery.

This black and white husky born in Alaska helped to save the lives of many children. In 1925, a remote town called Nome was suffering an outbreak of the deadly, and highly contagious, infection diphtheria. But the only cure was 1,200km away. The thick ice and freezing temperatures meant that boats, trucks and planes couldn’t reach the town. A team of over 150 huskies transported the cure to the town but Balto was made famous for being the lead dog on the final leg of the journey. There’s even a statue of him in New York’s Central Park!

Possibly the most famous movie star dog to ever have lived, Rin Tin Tin’s story didn’t get off to a good start. He was adopted by an American soldier during WW1 in war-torn France where the rest of his letter unfortunately perished. He was taken back to Los Angeles where he caught the eye of a filmmaker after reportedly jumping 12-feet into the air at a dog show. Rin Tin Tin went on to appear in nearly 30 movies in the 20’s and 30’s. He was also dubbed the unofficial mascot of Warner Bros. Studios and is sometimes credited with saving the studio from financial ruin. He even has a star on the Hollywood Walk of Fame! 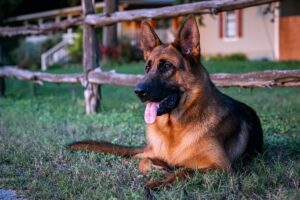 Laika was rocketed (quite literally!) into fame by Russian scientists when she became the first living creature in space. It was the 1950’s and Laika was found wandering the streets of Moscow. The scientists took her in and trained her up for life on a rocket ship. Laika unfortunately didn’t survive the entire journey that the Sputnik 2 took above earth but she did help the scientists discover more about space travel.

German shepherd police dog Trackr is a hero in the highest form. His owner, Canadian police officer James Symington, was a 14 hour drive away from New York when he saw the 9/11 attacks shown on the news. They immediately jumped in the car and drove through the night to go and help search for survivors in the wreckage. A full 27 hours after the attack took place, Trackr found a lady called Genelle, the last living survivor to be found. Trackr became a symbol of courage, determination and hope. When he passed away in 2009, scientists created clones of Trackr and five puppies were born from his DNA.