Microchipping cats is to become law

The government announced last year that microchipping cats is to become law in the near future. It has been a legal requirement to for all dogs to be microchipped since April 2016.  When you look at the statistics, the number of cats that go missing each year is quite astounding. According to the Hereford Times, tens of thousands of cats are reported missing annually in the UK. On top of this, Pet Theft Awareness says that cat theft have tripled in the past 5 years.

The government launched its Action Plan for Animal Welfare in May 2021. It aims to strengthen its post-Brexit strategy to maintain the UK’s world-leading reputation for animal welfare. It tackles puppy smuggling and seeks to crack down on hare coursing. But the government also wants to make microchipping for cats compulsory. This will enable lost or stolen cats will be located and returned to their owners more quickly.

Microchipping is a quick and pain-free experience. It involves inserting a small chip containing a serial number unique to your pet underneath the skin. It’s a perfectly safe process that is very effective and never needs repeating. 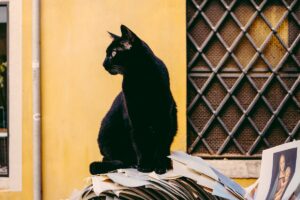 Under the new plans, owners will need to ensure that their cat is microchipped by 20 weeks. Failure to do so could result in a fine of up to £500. It costs between £10-£30 to microchip your cat. There may also be additional database charges. However, those struggling to afford these services may be able to get help from vets or charitable organisations.

However, some experts have criticised the difficulty and complications associated with the current dog microchip database. Currently several independent parties operate a number of different databases. These all have different set-ups and rarely share data. This makes it very difficult for vets to crosscheck details. Experts hope the government does not make the same mistakes. Malcom Morley, junior vice-president of the British Veterinary Association told the Independent:

“As a priority, we’d like proposals to streamline the microchipping database system into a single point of entry to be accelerated. There are currently around 16 separate databases, which can pose a huge barrier to successful reunification of pets.”