Many of us love our dogs unconditionally and many of us will even admit to preferring our pets company to our partners, but a new study has revealed that dogs are just as devoted to us as we are to them.

Ask any dog owner and they’ll likely have a story about their dog coming to comfort them when they’ve been sad or of their dog having a ‘sixth sense’ when it comes to their owners distress but it turns out that dogs are willing to go above and beyond what we might assume in order to protect and comfort us. It turns out the story of Lassie may not be all that far-fetched.

Assistant professor of psychology at Ripon College in Wisconsin, Julia Meyers-Manor, decided to investigate this subject more formally after an afternoon of play-fighting lead to her collie unexpectedly digging her out of a pile of pillows. She teamed up with graduate student Emily Sanford to find out more. 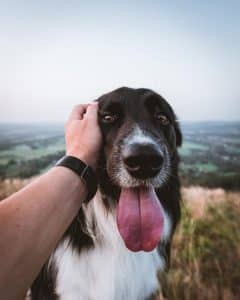 The study involved 34 dogs of different breeds including pugs, Labradors and shih tzus. Their owners sat behind a clear door that was held shut by magnets and were then asked to either cry or hum a tune. The researchers found that almost half of the dogs opened the door and although the dogs didn’t open the door more often if their owners were crying, they did find that the dogs who opened the door when their owners were crying opened it three times faster.

During the experiment they also measured the levels of stress that the dogs experienced. It found that the dogs that didn’t open the door were so distressed by the sound of their owners crying that they were too upset to do anything. The dogs that did open the door still showed signs of stress but the levels were lower so they were able to ‘rescue’ their owners because they weren’t overwhelmed with their own feelings of distress.

So, there you have it, scientific proof that a dog really is man’s best friend.