New study says that cats recognise their own name

A new study by a group of scientists in Japan has revealed that cats are able to recognise their own name. Previous studies have shown that other species such as dolphins, parrots, dogs and apes are capable of recognising certain words, but this is the first study of its kind to focus on felines.

The study was led by Dr Atsuko Saito at Sophia University in Tokyo. They used 78 cats from local homes and “cat cafes”- which are very popular in Japan – to try and find out whether cats were capable of recognising their own names among other commands and words.

Each cat was played a recording of either their owner or one of the researchers speaking four different words, followed by their own name. Researchers were looking for responses that may indicate recognition, such as movement of the ears and head, twitching of the tail or making a sound in return.

Most of the cats showed an initial response to the sound of voices when the tape began but soon lost interest as the recording went on. However, when their name was read out at the end of the tape, many of the cats showed a strong response which would indicate understanding.

The authors said in their paper for the Scientific Reports,

“Cats are sensitive to differences in human voice characteristics”

However, the study team agreed that although the cats appeared to recognise their names, they were probably not attaching meaning to it, rather they were learning to associate their name with positive or negative outcomes, like their name being called to signal food or a trip to the vet. 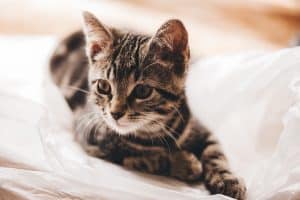 It was found that the cats residing in the local cafe were less responsive to their names and had more difficulty differentiating their own names from those of the other cats they lived with. In this instance, the cats probably associated all of the familiar names being called with punishments or rewards.

So, next time your cat isn’t responding when you call them, just remember that it has now been scientifically proven that they are ignoring you on purpose!