1 in 3 people prefer their pets to their partners

According to new research carried out by pet food maker, Fresh Pet, us Brits REALLY love our four-legged friends. The survey, carried out via OnePoll, revealed that more than a third of owners favour their pets over their partners.

The survey questioned 2,000 cat and dog owners and some may find the results quite shocking. More than half the people surveyed said that they prefer spending time with their fur babies with reasons cited including that they are always in a good mood, don’t nag and that they never talk back. In fact, three in 10 adults said their pet was a better listener than their other half and 45% said that they liked the fact that their pets don’t judge or question them.

And even when it comes to giving affection, our pets still win with 29% of those surveyed saying their pets are better at snuggling than their partners and 44% would rather cuddle up to their furry friend. Nearly half of the pet owners questioned admitted giving their pets more attention every day than they gave their partners. A third have also been known to post more pictures of themselves with their cats and dogs on social media than with their human significant other. 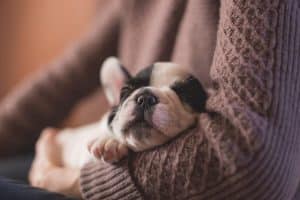 Most surprising may be the finding that 14% of the people surveyed said that they would rather spend the rest of their life with their pet rather than their partner.

“Whilst some of the findings of this research are on the surface rather surprising, what they actually demonstrate is just how much us Brits love our pets and why they’re such an important part of our families”.

She went on to add:

“It’s clear our beloved pets mean the world to us…it seems even more than our other half at times!”