There are a number of pet health hazards in the winter which you should be aware of to protect your pet!

One of these pet health hazards is Antifreeze as it contains ethylene glycol (also found in windshield de-icers and brake fluid) which is extremely poisonous to dogs and cats. Many pets are attracted to antifreeze, as they find it sweet-tasting, but ingesting it in even the tiniest of amounts can be very dangerous. It can cause kidney and nervous system damage, acute kidney failure, and death. To avoid antifreeze poisoning, make sure any antifreeze containers around your household are out of reach by your pet and tightly closed, be sure your car is not leaking with the substance, and clean up any spills straightaway and thoroughly.

Some common symptoms of antifreeze poisoning, occurring within 30 minutes to 12 hours of ingestion (if your pet shows any of the following symptoms, take them to your vet immediately): 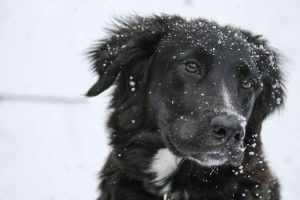 Hypothermia can occur when your cat or dog is exposed to the cold for too long, so you should always keep a close eye on your pets during the winter months – especially if they don’t sleep inside during the night. If they sleep outside at night, you should make sure a warm, dry shelter is provided for them to snuggle into. Here are some hypothermia symptoms in pets:

Take your cat/dog to the vet as soon as possible if any of these symptoms arise.

Frostbitten skin on your pet may initially appear as very pale, bluish/white and hard/cold, due to lack of blood flow. As the area is warmed and blood flow begins to return, it may become red and swollen, which can be quite painful. Use tepid (not hot) water to warm up the affected area for at least 20 minutes, warm a towel on the radiator and wrap them in it (do not rub the affected areas; this can cause more damage). Either take them to your vet, or call your vet and ask for advice on what to do.

To prevent frostbite, it’s best for your pet to avoid long exposure in cold temperatures, so for a dog, shorter walks may be suited until it gets a bit milder. There’s also the option of getting some boots and a coat for your dog; this will especially help if your pup has thinner fur, is older, or isn’t very used to cold weather. 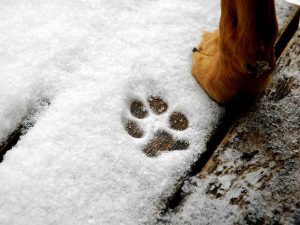 Rock Salt on The Pavement / Roads

Rock salt, made up from a mixture of sodium chloride and grit, is used to aid the de-icing of roads and pavements in winter. It can be extremely dangerous for pets, especially for dogs out on walks in the wintery weather. Because rock salt can irritate them, they will lick it from their paws or fur, and consuming this can result in a high blood sodium concentration which can cause vomiting, dehydration and lethargy. In severe cases it can lead to kidney failure and seizures.

In order to prevent rock salt poisoning, it is tremendously important that after a walk/time outside when the roads have been gritted, you wipe your pet’s paws, legs, and underside of their tummy. If you suspect that your pet has ingested any amount of rock salt, you should take them to your vet immediately.