Pet owners are being warned of the dangers of food packaging after a couple in Texas lost their beloved dog Petey Pablo in a tragic accident. Chrissy Young and Christian Villareal had left a packet of crisps on the counter and went off to work. Sadly, when they returned home, they found Petey Pablo in the kitchen with the crisp packet stuck over his head. He had suffocated.

Although this might seem like a ‘freak accident’, unfortunately it happens more frequently than you might think. Figures suggest that 3-5 pet suffocations are reported every week and 42% of these happen while the owner is at home. It takes just 3 minutes for oxygen levels to drop to a fatal point.

Bonnie Harlan, who also lives in Texas, started an organisation called Prevent Pet Suffocation after losing her dog, Blue, in 2011. Her Facebook page now has over 17,000 followers and recently became a registered charity. Her website contains lots of useful information and tips to prevent any further tragedies. Harlan recommends cutting up any packaging that may pose a threat into strips and ensuring that all packaging that is still in use is kept well out of reach of pets. She also recommends learning pet CPR in case your pet stops breathing. 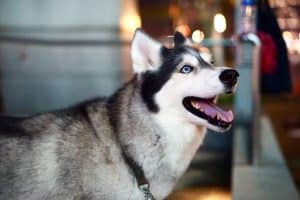 And it’s not just dogs and crisp bags that you need to worry about. Suffocation can happen to cats and other animals too. Cereal packets, pet treat bags and any other food packaging that could fit over an animals’ head could cause the same tragic outcome.

“We would advise pet owners to keep food stored safely out of reach of their pets, use pet-proof containers to store any edible items and monitor them while on walks outside. In case of an emergency, contact your local vet immediately.”

Aside from the packaging itself, Michael San Filippo, a spokesperson for the American Veterinary Medical Association, also warns against the actual contents of the packaging too as this could harm pets by causing vomiting and diarrhoea.

He says: “Human foods can be particularly troublesome, as these foods are formulated for dogs and can cause choking or poisoning dangers. For example, many foods contain the artificial sweetener xylitol, which is toxic to dogs and could be deadly.