Although around 200-300 New Guinea singing dogs exist in zoos and as pets around the world, they are thought to have come from a gene pool of just eight original dogs. This lack of genetic diversity and inbreeding means that females are at risk of becoming infertile in the future. This would be catastrophic for the breed.

American researcher James McIntyre has been searching for these dogs in the wild since 1996. After a failed research trip, the project lost momentum and the search ended. But, in 2012, an ecotourism guide took a photo of what appeared to be one of the elusive animals. This reignited the search and in 2016, McIntyre returned to where the photo was taken.

McIntyre spent a month looking for the dogs. After 28 days, he had nothing to show for it except stories and some old faeces. Feeling defeated, he went to collect his camera traps. The camera revealed 140 photos of a whole pack of dogs that included both males and females but also pups of varying ages.

The research team returned again in 2018 armed with bait and traps. This would consequently enable them to gather DNA samples to confirm the breed of the wild dogs. They collected blood from two male dogs and a deceased female. They also attached GPS collars. 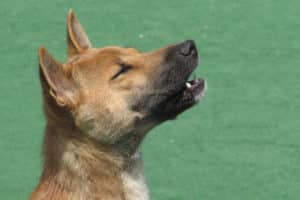 After returning to the U.S., McIntyre gave the samples to the National Human Genome Research Centre in Maryland. They compared the DNA to dingoes, captive New Guinea singing dogs, domestic dogs and village dogs from the local area. The DNA showed that the dogs were in fact New Guinea singing dogs. And most importantly, that they came from a genetically diverse population.

Elaine Ostrander, the geneticist who tested the samples and co-authored the paper that revealed the findings told The Daily Mail:

“By getting to know these ancient, proto-dogs more, we will learn new facts about modern dog breeds and the history of dog domestication.”

As a result of these findings, McIntyre is now the director of a foundation that aims to support the wild population of New Guinea singing dogs. He hopes these findings will push the Indonesian government and other organisations to do the same.