How you handle your rabbit could affect its welfare

Most people imagine that rabbits make great pets because they are cute and furry and lovely to cuddle. As such, they’re currently the third most popular pet in the UK after dogs and cats. But in actual fact, rabbits would usually prefer to be left alone. This is because rabbits are “prey” animals in the wild and so the only time they would be picked up would be by a predator.

A recent study published in the Journal of Applied Animal Welfare Science investigated the five main handling methods used by owners that are commonly referred to in books aimed at owners, vets and laboratory workers. Nearly 3,000 people across Great Britain and the Republic of Ireland responded to the survey. 92% of respondents were female and almost 70% of respondents had over 5 years of experience with rabbits. 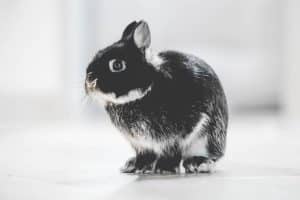 The survey found that most owners (86%) held their rabbits close to their body. Other surveyed handling methods included “scruffing”, holding the rabbit by the scruff of their neck, which was a potential welfare issue as rabbits are likely to associate this with being grabbed by a predator. Holding a rabbit on its back is also not recommended as this can put the rabbit in a potentially harmful, trance-like state. Participants used words like “cruel”, “dreadful” and “distressing” to describe holding rabbits by the scruff and on their back.

“Handling of rabbits is likely to have a direct impact on rabbit welfare. Negative impacts on rabbits can be minimised by handling them in an appropriate way, including avoiding methods with a high potential to impede welfare, such as tonic immobility and scruffing.”

While results from previous studies have suggested that handling can be a negative experience for rabbits, there are some activities that are considered to have a positive effect on the rabbit in the long term. For example, it’s important to give your rabbit frequent health checks that may require handling.