Choosing a name for your cat is a big deal. Owners put lot of thought into choosing not only a name that suits the appearance and temperament of their cat, but also one that they’re happy shouting out loud for all the neighbours to hear as they call them in for dinner. People have many different methods for naming their pets. A name might be inspired by the name of their favourite TV personality, a character from a cartoon they like or someone they admire from the music industry.

Feline welfare charity Cat’s Protection recently surveyed over 34,000 people to see which cat names were the most popular. It seems traditional cat names like Mittens and Socks have fallen out of fashion and have been replaced by more ‘human’ sounding names. The Top 10 could easily be the names of the local primary school children. 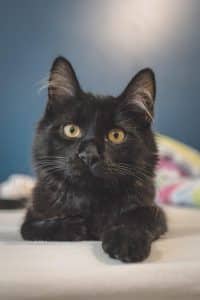 For female cats, Poppy has taken the top spot, followed by Molly and Luna, which has climbed a whopping 38 places since the last survey in 2014. Millie, Tilly and Lily are also in the Top 10. More conventional cat names have placed further down the list, like Smudge at 24, Sooty at 32 and Gizmo at 69.

For male cats, Charlie, Oscar and Alfie took the top three places with Sox coming in at number 55 and Tiger at 84. Interestingly, colour seems to have a big influence on the names we choose for our cats with Sooty being the most popular name for black cats and Misty being the most common for grey/blue cats.

There was also a big foodie influence with names like Cookie, Oreo and Pepsi making the list as well as people paying tribute to their favourite stars with names like Freddie, Harry & Ziggy making the Top 100 too. If these all seem a bit run of the mill to you though, some of the more interesting choices included Couscous the Puss Puss, Archibald von Snugglemuffin and Lord Puddington.