Unfortunately, a dog panting away in a sweltering car on a sunny day is a sight that’s far too common for many of us. Even though the majority of owners know how dangerous it can be, many still do it. They’ll give excuses about only being gone for a few minutes, or having parked their car in the shade, or having left the windows cracked open to let in a breeze. But a dog trapped in a car on a hot, sunny day can get into serious trouble much quicker than a lot of people realise.

According to a recent report from The Sun, a car left in the heat when it’s 24 degrees celsius outside can reach temperatures as high as 34 degrees in as little as 10 minutes. Leave your car for half an hour and you could see temperatures rise as high as 43 degrees. That could put your pet in serious danger and at risk of things like heat stroke, kidney failure, brain damage and even death. 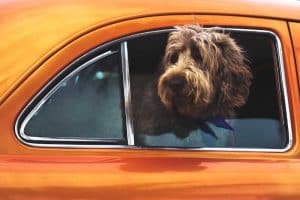 Although it’s not currently illegal for you to leave your dog in your car, if your dog were to die or become seriously ill as a result of your actions, you could be found guilty under the Animal Welfare Act 2006, which could see you receive an unlimited fine and as much as six months in custody.

If you see a distressed dog trapped in a hot car, the RSPCA recommends phoning 999 rather than calling them, as the police will be able to respond more quickly and have powers of entry. Please be aware that if you decide to take matters into your own hands and cause damage to a vehicle, you may be required to defend your actions in court. If you do feel the need to break into the vehicle yourself, inform the police of your intentions and make sure you have photos and/or videos of the dog. It may also be useful to take down some names and phone numbers of any witnesses to the incident. According to the Criminal Damage Act, you have a lawful excuse to commit damage if you believe the owner of the property would consent to the damage if they knew the circumstances.

Check the dog for signs of heat stroke and treat them if necessary. The RSPCA has a valuable guide detailing the signs and first aid procedure for heat stroke on their website.