Why do dogs bark?

All dogs bark at some point for some reason, barking is just part and parcel of dog ownership. Unless of course you’ve got a dog that doesn’t bark at all, like the Basenji dog from the Congo that yodels in place of barking. But do you know why your dog barks?

Barking is a form of communication for dogs that lets you know there’s something wrong, or something they want. Your dog could be barking for many different reasons, such as:

Dogs are sociable animals that historically would have lived as a pack so they are generally fond of communication and interaction with others. If your dog is home alone a lot or you have a tendency to shut them out in the garden, your dog may begin to bark to signify that they are lonely or bored.

Another historical genetic trait of dogs is that they are very territorial and protective of their own space. A dog may begin to bark if they hear someone approaching your house or when passing other dogs out on walks. Your dog will generally seem to be on high alert and may even appear aggressive when barking to protect their territory. 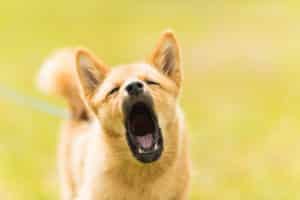 Your dog may bark or yelp playfully when you return home from work or when you’re playing. A wagging tail and some excited jumps usually accompanies this type of bark. They may also display this behaviour when bumping into a ‘friend’ at the park or on a walk.

Dogs may begin to bark when they feel frightened or unsure of something in their surroundings. This could be anything from thunder and lightning, a siren, fireworks or other animals. This type of barking is usually short-lived, as it will cease once the source of the fear has disappeared.

It could be that your dog is hungry or that their water bowl is empty. Maybe they want to go for a walk or they just want some cuddles and attention. Maybe they need you to let them out for a wee. This type of barking can be hard to decipher if its not accompanied by some additional cues, like nosing their food bowl or sitting at the back door.

If your dog is barking excessively for prolonged periods of time there are some training methods you can use to help them defeat this habit. Don’t let the behaviour continue as the longer you leave it, the harder it will be to train it out of them. It could also be a sign of an uncovered medical condition that requires treatment so don’t be worried about asking your vet for advice.