We’ve all been there. You’re out in the park on a beautiful sunny day, the breeze gently rustling the leaves, the sun warming your back as you walk along, your dog bounding about like all his Christmases have come at once. And then you see it. Your dog does the dreaded drop and roll. As he races back towards you so you can share in his excitement you wonder how you can stop him from jumping up. But have you ever wondered why dogs revel so much in rubbing themselves deep into stinking piles of poop?

In all truth, despite dogs being domesticated for over 20,000 years, nobody has actually figured out why dogs like to cover themselves in the scent of something awful, but there are many different theories around.

One theory is that the habit comes from back when dogs were still predators and had to hunt for food. They would roll in the faeces of herbivores or discarded carcasses in order to mask their own scent when stalking their prey. 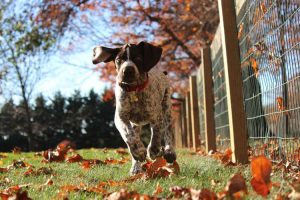 Another theory is that dogs use these smells as a form of communication with other dogs or members of their ‘pack’. The smells would inform the rest of the group where the dog had been and what it had found and could maybe even be used as a scent trail to help other dogs find any leftovers to be scavenged.

Dogs may also be using this rolling behaviour in order to mark their territory. Depositing their scent on a particular area would warn other dogs off their patch unless they were willing to put up a fight to claim it.

Or maybe the answer is a much simpler one. Maybe your dog is just bored. We all know that boredom can breed destructive behaviour in dogs like chewing or digging; maybe your four-legged friend is just trying to entertain himself.