Why your pet is the best co-worker you can have

Although we’ve seen the back of 2020, many of us are still working from home. While having a pet co-worker can be a cause for comedy on work Zoom calls, your four-legged friend may be the best colleague you’ve ever had.

During lockdown, the number of pets in our households boomed. According to insurance company Direct Line, British people introduced 5.7 million new pets into their homes between March and September. Of these, 2.2 million were dogs. There has been plenty of research into our pet’s effect on our mood in the past but 2020 provided unprecedented new circumstances for researchers. This means a lot more pet co-workers up and down the country.

Psychologist Jo Hemmings has been working with pet nutritionists Purina on the effects of working alongside our pets. Hemmings told the Daily Mirror:

“They reduce the levels of cortisol and of adrenaline in your bloodstream, keeping anxiety under control, keeping the situation that bit calmer.”

Cats Protection also conducted a study in early Spring 2020, questioning 700 pet owners that were working from home. The survey revealed that cat owners reported feeling calmer and less lonely thanks to their furry companions. 40% of respondents even said that they discussed work issues with their cats. 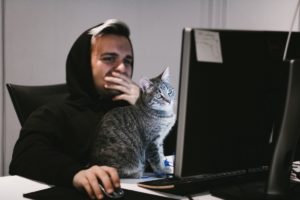 “For many people who are working remotely from home for the first time, the isolation may be difficult to adjust to. Having a pet for company may make them happier, more comfortable and even more productive”

The Human-Animal Bond Research Institute in Washington DC has been researching how the bond between humans and animals has improved lives during the COVID-19 pandemic. 72% of pet owners said that spending time with their pets has helped to reduce their stress. 75% of pet owners say they are turning to their pets three times a day or more to feel better. 16% even reported turning to their pets 10 times or more throughout the day.

A study published in September by the universities of Lincoln & York revealed that pets had helped over 90% of respondents to cope emotionally with the lockdown. The study also found that owning a pet helped people maintain better mental health. It cited that pets provided a ‘buffer’ against psychological stress.